Their name comes from one of their tribal towns called "Calos", which means "fierce people". They lived up to this name and were described as war-like and unfriendly.

They are sometimes known as the "Shell Indians". They lived on the coast of Florida from Tampa to the Thousand Islands, south of Naples.

They were a nomadic people, who fished and hunted instead of farming. They fished with nets, weirs, and traps in the various waterways and created huge mounds from discarded shells. As a matter of fact, Mound Key was made by the Calusas from shells and marl - a kind of clay.

They also used the shells for tools, jewelry, utensils, ornaments, and spears. You could say they were the first shell collectors in this area! 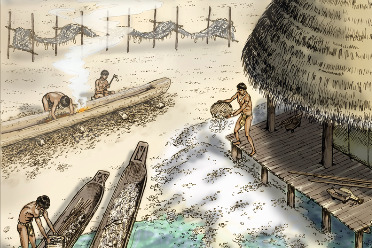 The Calusas were great sailors. They fashioned dugout canoes from cypress trees. The larger canoes could hold up to fifty people, and had oars and sails.

They dug canals to get around more easily and it is believed that they sailed as far as Cuba and Mexico. The Caloosahatchee River, which separates Cape Coral and Ft Myers means "river of the Calusa".

Calusa men were very tall, being around four inches taller than Europeans. They wore their hair long or in topknots with feathers, and wore deerskin breeches for clothes.

Calusa warriors painted their faces and bodies in bright colors for battle or for ceremonies.

Women wore skirts made of Spanish moss or palm leaves and, it seems, little ornamentation, except for flowers in their hair.

Children learned to swim and sail at an early age, they learned everything they needed to know from their elders.

Calusa society consisted of "commoners" and "nobles". They were governed by the tribal chief, a military leader, and a chief priest.

The Calusas lived in large communal houses, on stilts, with woven Palmetto leaves for roofs and no walls. The "capital city" of Calos had 16 houses with 1000 residents in 1697, with the total population of the tribe reaching about 50,000 people at one time.

The first recorded contact between Europeans and Calusas was when the Spanish explorer, Ponce de Leon, and his crew landed at or near the Caloosahatchee River in 1513.

They were attacked, some of the men were killed, and so they departed for Puerto Rico. When he returned in 1521 to build a colony, they were attacked again and this time, de Leon was mortally wounded.

Attempts to Christianize the native Americans failed and there was little contact for more than a century. In 1614, an attempt by the Spanish to attack them also failed.

In the 1700's, infectious diseases, slaving raids and attacks by Creek and Yamasee Indians who were supplied with guns by the English, decimated the Calusa population.

In 1763, Spain ceded Florida to England and surviving Calusas were taken to Cuba. It's also possible that a few were absorbed into the Seminole tribe.

Although there are no Calusas left today, their tribe makes up an interesting part of Native American history. 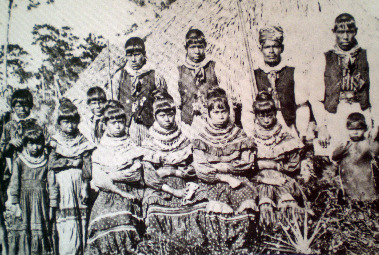