Ponce de Leon was a Spanish explorer that led the first European expedition to Florida.

Although he is credited for having discovered Florida, he was probably not the first European to have set foot here, as there were slaving ships in the area beforehand.

Legend has it that he was searching for the Fountain of Youth.

Several Spanish accounts of the history of Florida tell of him searching for waters to cure his aging.  It is thought that he was mainly searching for gold and helping to expand the Spanish empire.

De Leon had been part of Christopher Columbus's Second Expedition in 1493. He saw several islands, including Hispaniola and Puerto Rico. 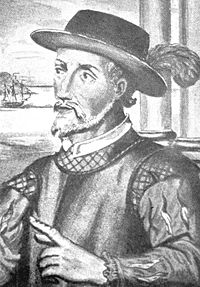 It is not known if he returned to Spain or not, but by 1504 he had been appointed a provincial governor in Hispaniola because he successfully crushed a rebellion by the Taino natives.

It was from Taino natives that he heard about a land where there was abundant gold found in the rivers.

He went on an expedition to Puerto Rico in 1508 where he did find gold. He was made governor there and received land and became prosperous.

Ferdinand II of Aragon heard of undiscovered islands northwest of Hispaniola and in 1511, and wanting to reward Ponce de Leon for his services, asked him to search for them.

They reached the Bahamas on March 27, Easter Sunday and then landed in Florida, somewhere between St Augustine and Melbourne after they sighted land on April 2.

They named the land "La Florida", which means "the flowery".

The name described the lush plant-life and also commemorated the Easter season, which Spaniards called "Pascua Florida", the "Festival of Flowers".

The expedition followed the coast down to the Keys and then made landfall somewhere near Charlotte Harbor or possibly Tampa Bay.

They anchored for several days and met natives who became hostile.

Several men were killed on both sides and the expedition left with 8 captives.

They looked for more islands and eventually made it back to Puerto Rico 8 months after setting out.

He had to put down a rebellion by the Caribs, went to Spain to report to the king and was knighted and given other honors. He was also given a contract to settle and govern Florida.

Ponce de Leon finally returned to Puerto Rico in 1518. He then organized an expedition to colonize Florida that left in 1521.

There were 2 ships, 200 men including colonists, and horses, other animals, and farming equipment.

They probably landed either at the Caloosahatchee River or Charlotte Harbor. 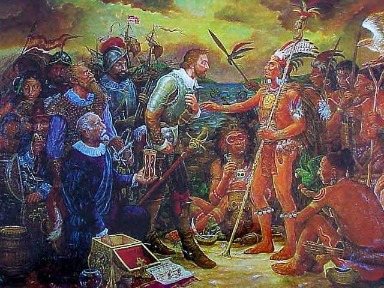 Calusa Indians attacked the colonists and de Leon was injured by a poisonous arrow that struck his thigh.

The colonists sailed back to Cuba where Ponce de Leon died from his wound.