Florida Wildlife - Find out about some of the interesting birds, animals, and bugs you'll find in your Cape Coral backyard.

Florida is home to over 700 kinds of land animals, 200 kinds of freshwater fish and 1000 kinds of marine fish.

Our state is proud to have over 1000 nesting pairs of the bald eagle, one of the densest concentrations in the US.

Cape Coral has the largest population of burrowing owls in the world!

We have alligators, bears, manatees, gopher tortoises, sea turtles, lizards, and panthers.  We also have many species of shore and water-habitat birds, plus thousands of different kinds of insects. 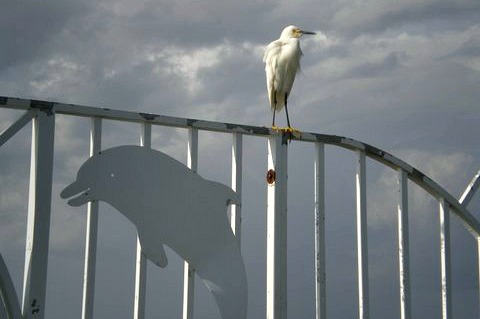 On this page, I include the Cape Coral wildlife I've had the pleasure ..... or pain, sometimes ........ of encountering or observing.

Back when we lived in Connecticut, we used to enjoy observing the various northern birds that would come to feed on our back porch.

Now we get to watch water-loving birds from the lake behind our house.  We have seen great blue herons, egrets, ibises, wood storks, white pelicans, moorhens, and anhingas. 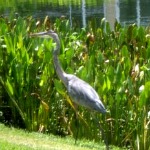 Great Blue Herons are pretty large, about 45"-54" tall, and are a bluish-grey color.  Their habitat includes the shore and wetlands.  They eat fish, shrimp, crabs, insects, rodents, and small birds.  Many a time I've opened up my back sliding door and scared off a great blue heron that was standing in the lake in front of my lanai, and off it would go, croaking away.  I tend not to feel so bad though, because they are usually standing completely still watching for a chance to snatch and eat a moorhen baby from it's nest. 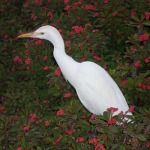 Egrets are a type of heron, but the ones I see on my lake are a lot smaller.  They are white in color with yellow feet.  They like to eat fish, small snakes, amphibians, crustaceans, and insects.  When stalking prey, they will run or shuffle their feet in the water to attract fish.  They will also fly with their feet just above the water.  The Great Egret is about 37"-41", and you may have seen cattle egrets that hang out on cows and eat the ticks and flies that pester the animals. 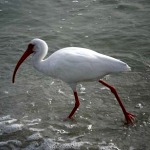 Ibises are a medium-sized bird,  they are white with a long curved dark pink bill.  They like to eat small fishes, insects, and crayfish.  Young ibises have grey feathers.  When we first moved to Cape Coral, a flock of ibises would land in our front yard to pick around in the grass for bugs.  Every time a car would drive by, they would get scared and make these honking noises while flying up to my roof or my neighbor's roof.  Needless to say, we both ended up having poopy roofs! 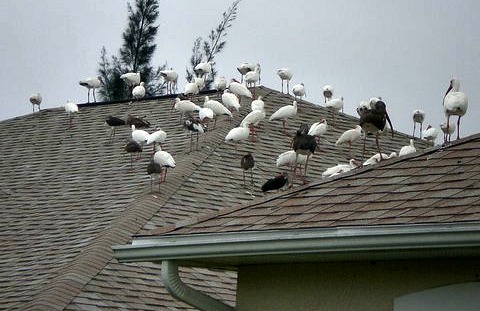 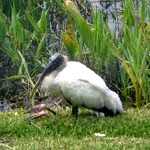 Wood Storks are a rather large bird with a white body and grey head.  I think they're kind of ugly but are interesting to watch.  They walk around my lake digging their feet in the mud for food, which you can see in the video below.  Their legs bend at the knee going the opposite way that our knees bend.  When they sit down, it looks so strange because their legs go backwards.  Wood storks will also open up their beaks underwater and wait for a fish to swim in, they can then snap their beaks shut in only 25 milliseconds to catch dinner! 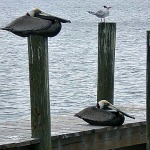 Brown Pelicans are fun to watch at the beach!  After dawn and before dusk, they fly along the shore and dive down with an ungraceful swoop that looks like a crash landing, to stun fish and catch them in their huge beaks and throat pouches.  Otherwise, these big birds like to hang out on piers and jetties, or along the beach.  Brown pelicans live on both coasts of the US, and tend to for colonies on uninhabited islands away from predators. 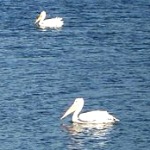 White Pelicans are beautiful birds, from a distance, they look like swans to me.  They arrive to our lake every spring and are a delight!  These pelicans don't dive for their food like brown pelicans do, instead, they catch fish while swimming.  They also eat amphibians and crayfish.  One spring a flock of white pelicans took off from our lake going one direction and a flock of anhingas took off in another ..... I feel so fortunate to be able to see all this wonderful Florida wildlife in my backyard!  I took the video below at Cypress Cove ........ you can see White Pelicans swimming with Anhingas plus Herons, I think, and a Wood Stork: 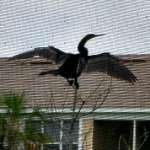 Anhingas are also called Water Turkeys or Snake Birds.  They are medium-sized, and are mainly black.  Males have white feathers in their wings, and females have buff-colored heads, necks, and upper chest.  Anhingas swim with only their necks and heads sticking out of the water.  They catch fish by spearing it, flipping it in the air, and then swallowing it whole ........ just like in the video below.  You can see them perching in trees or on the ground to dry their wings. 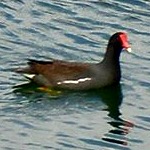 Moorhens look like ducks but are more like chickens.  They are small with black and grey feathers, they have a red shield on their beaks and chicken feet. Moorhens may be small birds, but they make the loudest grating calls when disturbed.  They nest in the grasses surrounding our lake, and we enjoy watching the parents swim with their chicks. 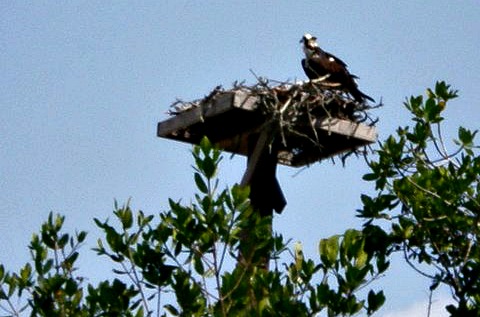 Have you noticed the stands around Cape Coral for Eagles and Ospreys to make nests?  When we lived in our rental, we often saw an osprey fly over our canal and then swoop down to catch a fish.  We could see it fly off with a fish in its beak!  Eagles have been removed from the Florida Wildlife Imperiled Species list, but that wasn't the case when the gated community I live in was being built.  My condo building couldn't be built while a pair of eagles were nesting on the property.  they finally moved and my building went up.

Watch some Florida wildlife on these webcams:

Go to my Burrowing Owls page to find out more about these beloved Cape Coral birds. 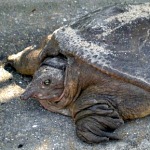 The Softshell Turtle has the pointiest, snootiest little snout which allows them to use as a snorkle so they can stay under water for long periods of time.  We have seen these funny-looking turtles on our street every now and then, and we often see them in the lake.  Be aware that they can claw and bite down hard if you try to pick one up.

This next group of Florida wildlife are not indigenous to the area and some are considered pests: 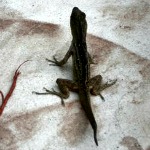 Brown Anoles are a type of lizard that were introduced to Florida from the Bahamas.  You'll see them scurrying around everywhere and we always have at least one living on our lanai.  Males have a red throat fan called a dewlap, that they stick out while bobbing their heads and doing pushups for courtship, threats, or territorial displays.  When threatened, they drop their tail to distract a predator so they can get away. they can also change color to camouflage themselves.   I think they're very cute!

The SW part of Cape Coral has a problem with Monitor Lizards, another species that was introduced to Florida wildlife by accident, probably as escaped pets.  They pose a threat to burrowing owls since they live in burrows, usually near canals.  They can run fast, can swim under water for up to an hour, and have a nasty disposition, so contact Cape Coral's trapper if you see one.

Green Iguanas are also Florida non-natives that came here either as pet escapees, or stowaways on ships from South America.  They are considered an invasive species and, like anoles, have dewlaps and do head bobbing or hissing when threatened.  We used to see a green iguana on the seawall across the canal from our rental.

If you live on a canal, river, or lake, you might be fortunate enough to see Otters!  These semi-aquatic mammals are so playful and adorable.  I actually was able to take a video of some otters frolicking in my backyard: 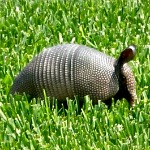 Armadillos are medium-sized mammals, they are covered with bony plates that offer them protection.  When they are threatened they tend to flee or roll up into a ball.  I took the photo of this little guy digging up a lawn on Matlacha, which can be a nuisance.  They dig to make burrows and to find food ........ armadillos love to eat ants, grubs, termites, and other insects.  To eliminate them from your yard, use native plants, treat your yard for grubs, buy pest control powders from the hardware store.

When thinking about Florida wildlife, for most people alligators come to mind first and then manatees!  Go to my About Alligators and Manatee Park Ft Myers pages to get more info on these animals. 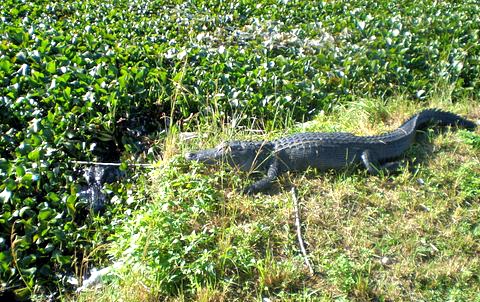 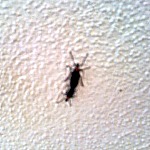 Love Bugs are a type of fly that was probably came to Florida from Central America by way of Texas or Louisiana as a stowaway on a ship.  During the spring, mating pairs are an annoyance, flying all over the place, or covering outdoor surfaces including the windshields, grills, and lights of cars.  They don't bite, but something in their bodies can ruin the paint on your car, so you must clean the dead love bugs off within 48 hours. 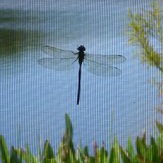 Dragonflies live near ponds and lakes because that's where they lay their eggs.  The larvae are called nymphs, and though harmless, they can bite.  The adults do not.  They've been known to hover over parking lots, mistaking the blacktop for water. Usually in July, we have swarms of them ............ which we don't mind at all, because they gobble up tons of mosquitoes as they fly around in zig-zaggy motions.  The wetter the summer, the more dragonflies there will be.

I have found that mosquitoes aren't as bad down here as they were in Connecticut.  That's because they spray here to keep them under control.  There are two types of mosquitoes the district deals with, one kind breeds better with more rain, the other with less rain:

You can help control the mosquito population by getting rid of standing water, or replacing it with fresh water every few days, and trimming back vegetation near doorways where mosquitos hide to keep from drying out.

Gallinippers are a type of giant mosquito that breeds near freshwater.  They lay their eggs on dry land to hatch by rainfall or flooding.

No See Ums are actually Biting Midges, a tiny type of flying insect whose habitat is salty marshes and mangrove forests.  You can feel you're getting bit but can't see them, then a day or 2 later, you really feel the bite hurting.   They usually bite at dawn or dusk from spring to fall.  Besides repellents, use a fan if you want to sit outside at those times of day.

Fire Ants are to be avoided as their bites really hurt and for those who are allergic, they can hurt for up to 2 weeks, and can cause some shooting nerve pain.  I've been bit several times and have seemed to develop an immunity to their venom, reactions lessened with each time.

Palmetto Bugs are large cockroaches and you won't have a problem with them or any of the other types of roaches if you have regular pest control.  Many times, spraying along the perimeter of the outside of your house is enough to keep them under control, with inside spot spraying only as needed. 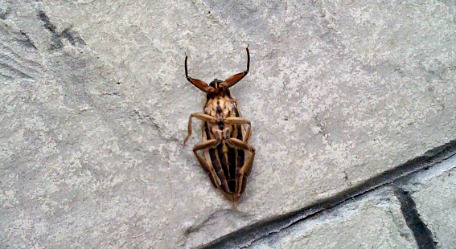 Of course, these animals and insects are only a small part of Florida wildlife.  I hope you've found them interesting and fascinating!  We've seen otters in the canals, there are bobcats and bears in the wild.

To find out about some of the kinds of fish in the Cape Coral area, go to my Best Fishing page. 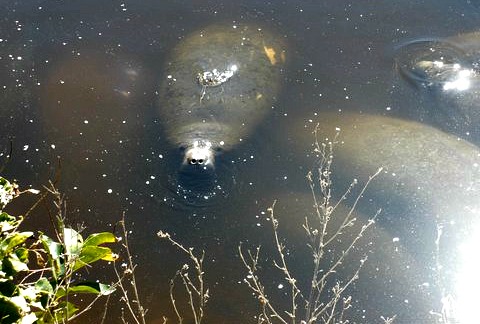