During the Seminole Wars, Cape Coral was the site of the Harney Point Massacre, an incident in the Second Seminoles War.

The wars involved the American Army and groups of Native Americans called Seminoles.

The conflicts usually started with settlers and Indians attacking one another. A treaty was made in 1823 and a reservation was established for the Seminoles. Whites were not allowed to encroach upon the reservation and the Indians were not to harbor runaway slaves. 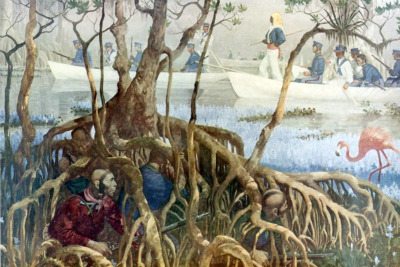 Both sides did not abide to the treaty. Some Indians went peacefully to the reservation, others did not.

The word Seminole comes from the Creek word "semino le", which means "runaway".

The Seminoles were groups of southeastern Indians such as the Alabamas, Choctaws, Yamasees, Yuchis, and Creeks that had moved into unoccupied areas of Florida in the 1700's.

It also refers to local Indians of mixed ancestry such as the Calusas who had lived in the Cape Coral, but who moved to Cuban/Spanish fishing camps that were located on the southwest coast of Florida, as their tribe became decimated. These mixed ancestry Indians were also called "Spanish Indians".

The Harney Point Massacre occurred in 1839, when Col. William S. Harney landed near the site of the Cape Coral bridge, with about 26 men and supplies. They came to establish a trading post, but it is thought that they came to capture and deport Indians.

A group of Seminoles had a camp across the river, in Ft Myers. They attacked the soldiers, took supplies and killed 13 men. Col. Harney escaped in his underwear to a boat and managed to retreat to a safe place. Some say Harney was helped by dolphins.

The next year, Harney returned with 90 man to exact revenge. They dressed up as Indians and were able to surprise the Seminoles. Although some of them escaped, Chief Chekaika was killed along with 9 other Indians.

There's a plaque near the Cape Coral bridge that describes the incident. 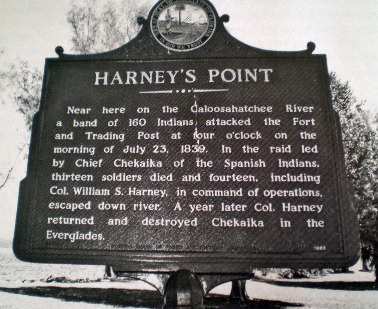