About Alligators - how to coexist with them, fun facts, and why they are so important to Florida's ecosystem.

The alligator got it's name from Spanish explorers who called it "el lagarto", which means "the lizard".

Alligators live throughout Florida. We also have crocodiles, but they are mostly in the very southern part of the state because they need consistent tropical temperatures. Alligators have shorter and broader snouts than crocodiles.

Gators average between 6 1/2 - 12' long. The largest alligator recorded in Florida was 17 1/2' long. Males are larger than females.  They live in fresh and brackish waters such as lakes, canals, rivers, marshes, swamps .......... and sometimes pools.

They are cold-blooded and so are mainly active at night. They become dormant when the weather gets cooler.

During mating season in the spring from March-June, we have heard them bellowing in the lake behind our house. Apparently the males will also head-slap the water to try to attract a mate. 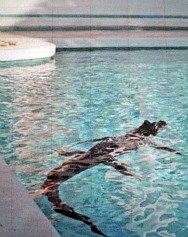 Large males are solitary and territorial. Smaller males are often in groups.

In summer, females build a nest of vegetation to incubate the eggs. As the vegetation rots, it heats up.

Now here is something that I didn't know about alligators: the temperature of the nest determines the sex of the babies. Warmer nests make males, cooler nests make females.

Females protect their young for about a year. Unfortunately, about 50% of the hatchlings don't make it, many are preyed upon by adult alligators. Racoons, otters, wading birds, and fish will also eat the babies.

Alligators have powerful jaws, but only for closing their mouths. That's why a man can hold an alligator's mouth shut once it's closed.

You should never swim with your pets or let them near waters where gators might be. Swim only in designated areas, they may not even be seen in only one foot of water.

The two main things you need to know about alligators: 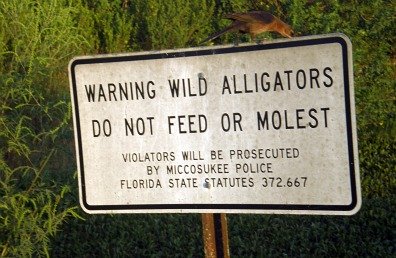 Never feed alligators! They are protected and you will be fined $500 if you are caught because alligators normally fear and avoid humans, but if you feed them, they lose their fear and may attack.

When fishing, never throw fish scraps back into the water, any gators may think you are feeding them.

Alligators like prey that they can kill and eat in one bite. Larger prey is grabbed and dragged into the water to drown. They then do a death roll, where they spin and convulse, biting off smaller chunks that they can swallow.

Sometimes they let large pieces of food rot in their mouths so they can then swallow it.

Gators can catch prey under water, but they have to lift their heads out of the water to swallow. 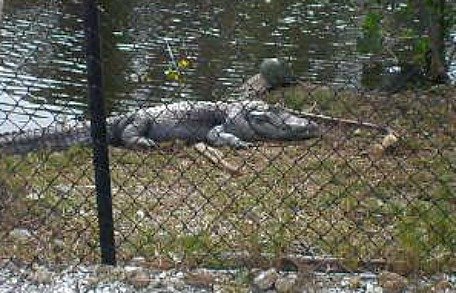 Don't get too close, even though gators tend to crawl on their bellies, they are capable to short bursts of speed. They can lift up their tails, walk on their toes, and lunge forward.

If you get bit, go to the doctor right away because you can get a nasty infection from a gator bite, they have lots of bacteria in their mouths.

Alligators that are longer then 4' and exhibit aggressive behavior are considered nuisances and need to be trapped. They are then harvested, usually for food.

I tried some gator bites once. They were deep-fat fried and so were pretty tasty, but kind of chewy and rubbery.

Another interesting thing about alligators is that they have one-way breathing. For us, air flows into our lungs through branches called bronchi. The air dead-ends in air sacs called alveoli, then flows back out the same way.

With alligators, the air flows into the outer branches called bronchi, then through smaller tubes called parabronchi, and then out out of the lungs through inner branches. 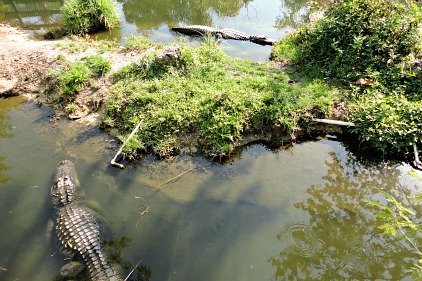 In Florida alligators are so important to our ecology. Since they are predators, they keep certain aquatic populations in balance.

Another way is that during dry season, they make holes in the mud, which makes a safe haven not only for them, but also for other aquatic animals, and makes a place for seeds to take root, helping to maintain marshlands.

It is definitely possible to coexist with alligators ......... and even appreciate them.

If you like learning about alligators, you may want to get my free ebook Weird Cape Coral, where I have a section about gators. All you have to do is sign up for my newsletter, Gator Bites.

Another idea is to go to Smugglers Cove Mini Golf in Ft Myers where they have small gators on platforms in the lake in front of the mini golf courses. Kids can even feed them with bamboo poles.

I've had people asking me where they can safely see alligators for free. If you drive down the Alligator Alley section of I-75 to Miami, you can see them off the side of the road.

If you want to see them up closer, there's a gas station about halfway down the Alley. They have an area that is fenced on 2 sides where there might be a couple of gators. Be careful though, we couldn't watch them for too long because a big one started heading towards the fence opening.

Related Pages to About Alligators

Return to Come-to-Cape-Coral Home Page from About Alligators