The Best Fishing in the world is right here in Southwest Florida, in the waters that surround Cape Coral.

We have a unique situation, because we have a large area of estuary waters bordered by mangrove forests on the coastline of the Cape that are perfect habitats for fish.

Estuaries are where fresh water meets salt water and in our case, the Caloosahatchee River meets up with Matlacha Pass and is bounded with the barrier islands of Sanibel and Captiva ............. making this spot a fishing paradise!  We have shallow water fishing, plus freshwater lakes, canals with brackish waters, and deep sea fishing in the Gulf of Mexico.

You'll find fishing for sport and competition, and delicious food fish. On this page I want to focus on several fish that our area is known for: tarpon, snook, redfish, and grouper. 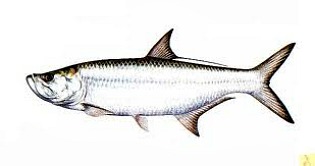 Tarpon is considered to be a sport fish, so few are caught and killed and it not in danger of being over-fished.

They are also called the Silver Kings of gamefish because they can reach 350 pounds and 8 feet in length are a challenge to catch, they are powerful and make spectacular leaps in the air when caught.

Tarpon breed in salt water but tend to grow up in estuaries and tidal creeks and will go to these warmer waters during the winter months. They mature within 7-13 years before going to deeper waters with other adults.

They can live in freshwater as well. Tarpon tend to swim in groups as they go after prey such as mullet, and they are known to swim in circles during mating.

This fish has a swim bladderwith a lung-like organ that allows it to breathe air, and you can see it break the surface with a distinctive roll.

This is important, especially for young tarpon, because the warmer and shallower the water, the more oxygen-deprived it becomes. But, tarpon will still gulp air in more oxygenated water, if they don't they'll die within hours.

Also a sport fish and a food fish as well, Snook mainly lives in salt water at depths of less than 60', but also inhabits estuaries and lagoons.

Snook can't handle cold water temperatures and will go to warmer freshwater in rivers and canals. They prey on shrimp, crabs, and other fish.

There are 4 species of snook in Florida, the Common Snook is the largest, sometimes reaching 4 1/2 feet long, and has a regular weight of 5-10 pounds, but can reach up to 50 pounds.

Some anglers call this type of snook a Linesider because of the black line along it's body's side. It is also known for it's lower jaw that juts forward.

The Fat Snook is smaller, reaches no more than 20" in length, and goes into freshwaters more often than the other species.

The Tarpon Snook reaches 16-18" in length, and the Little Snook reach about 12" long.

Snook are what is called Protrandric Hermaphrodites, in other words, they change from males to females when they mature, within their first year. Consequently, smaller snook are usually males and larger ones are female.

Redfish, also known as Red Drum, usually grows to under 40 pounds and can grow to close to 100 pounds. It is a popular sport and food fish.

They have a color range from lighter shades to reddish-copper and bronze. Some are spotted while other have none at all, all have a white belly.

Young redfish inhabit creeks, rivers, and estuaries. When they mature to about 30", in about 4 years, they move further offshore.

Redfish will feed on smaller fish like mullet, plus crustaceans and mollusks.

When a male redfish reaches maturity within 3-4 years, it will attract a female by vibrating a muscle in it's swim bladder that sounds like a drum.

Redfish will take natural or artificial bait, and can put up a good fight when hooked.

Along with spotted sea trout ........ redfish, snook, and tarpon are 3 out of the 4 fish you need to catch at one of best fishing tournaments in the area with what is known as a Grand Slam.

Cape Coral was known as Redfish Point before it was developed, and Redfish Pass is the narrow body of water that separates Captiva from North Captiva.

I've heard that you can sit at the pass and catch fish after fish all day long, making it truly a best fishing spot! 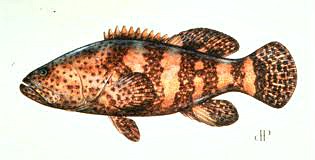 Grouper is a type of sea bass and is absolutely delicious! If you haven't tried it yet, you will love the mild flavor of this white, flaky fish.

There are around 65 species in Florida and they inhabit reefs, deep channels, moderate depths, and some even in shallow bays.

Grouper have a spotted body that camouflages them very well, they are bottom feeders and have huge mouths capable of creating a quick suction that their prey can't escape.

The Goliath Grouper can weigh up to about 700 pounds!

Here's a photo of me catching a Spanish mackerel that's quite a bit smaller and a lot easier to handle. 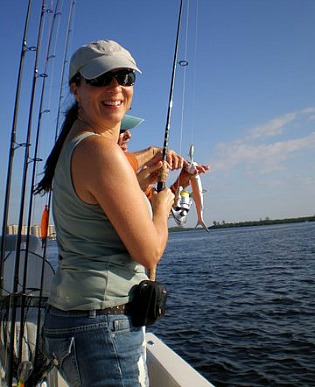 I hope you get a chance to go out and see for yourself that we do indeed have the best fishing of all!