With the refurbishing and rebirth of Ft Myer's downtown River District and the monthly Art and Music Walks, the Art Center has helped to breathe economic and artistic life into the community. 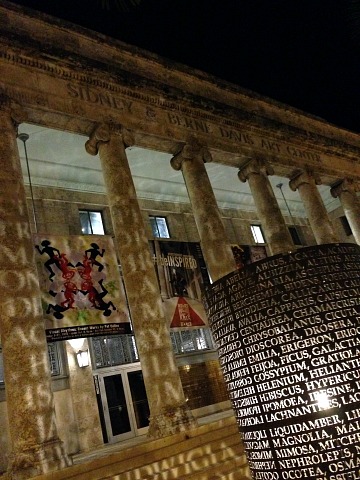 The post office was built in 1933 and is an example of Neoclassic Revival architecture ........ Florida style!   The Ionic columns on the front portico are reminiscent of Greek buildings, but they, and the rest of the building, are made out of limestone that actually has shells and coral in it.

The post office became a federal courthouse from the 1960's until 1998 after a new courthouse was built.  The building was abandoned and fell into disrepair until it was purchased on a 99-year lease from the city of Fort Myers by Florida Arts, Inc to be refurbished as a not-for-profit.

In 2006, Berne Davis contributed $1,000,000 towards the refurbishment of the courthouse .......... the building was named after her and her husband in honor of her generosity.

Most of the restorations have been completed with plans to still turn the rooftop into a sculpture garden and reception area.

So, who were Sidney and Berne Davis?

In 1925, Sidney, a banker from Virginia heard about a real estate boom in Florida and bought property in Tampa.  On the train down to see his investment, he spoke to Colonel JW Blanding, President of Lee County Bank, Title & Trust Co, who offered Sidney a job in Ft Myers.  Sidney took it!  He also bought the Heitman Clothing Store in 1934.

Bernese Davis was born in Florida near the Florida-Georgia line.  Her father worked in the saw mills and moved from camp to camp.  He moved his family to what is now North Ft Myers when Berne was 14.  That was in 1929 and the country was in the Great Depression, but Ft Myers wasn't as severely affected because of the post office being constructed and supplying jobs.

Apparently, a Republican politician by the name of BC Foxworthy kept bombarding the Hoover administration with requests for a post office in Ft Myers.  And, according to Berne Davis herself, Thomas Edison might have been the person who really helped to get the building constructed.  In February of 1929, President Hoover came to Ft Myers to help celebrate Edison's 82nd birthday.  Shortly after that, money was found for the post office.

Berne went to high school in Ft Myers and after she graduated, she worked as a secretary.  She met Sidney while "cruising the Main" with girlfriends hoping to meet one of the Philadelphia Athletics or a business man. They married and were very involved in many Ft Myers civic organizations such as Kiwanis, the Chamber of Commerce, Lee Memorial Hospital, the Masonic Lodge, the Shriners, and more.

After Sidney's death in 1989, Berne continued her work with the Edison & Ford Estates, Edison College (now Florida Southwestern State College),  Clinic for the Rehabilitation of Sanibel Wildlife, and other organizations.  She remained active until close to her death in 2016 at the age of 102.

We've enjoyed poetry readings, art shows, and music events at the center ..... and so will you as you're looking for what to do in Fort Myers!

The metal sculptures in front of the building are absolutely beautiful to behold ...... at night.  You'll have the perfect chance to see them if you go to one of the art or music walks that happen twice a month in the downtown area. 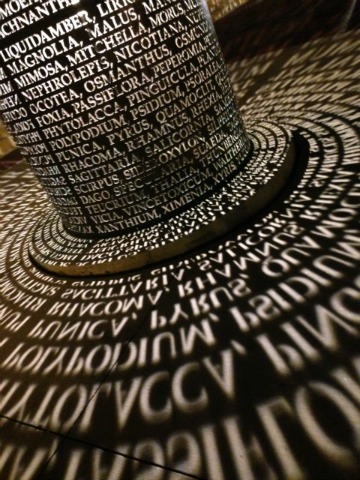 Art The 2 sculptures are called The Caloosahatchee Manuscripts by sculptor Jim Sanborn and were commissioned by Florida Light & Power Company in 2001.

They are bronze cylinders with letters cut through to let a center light shine through ........ creating art by casting light and shadows on the surrounding sidewalk, street, and buildings.

One of the cylinders is the story of Tchikilli, a Maskoki Indian chief descended from the Calusas, and his tribe's migration to the area taken from a passage written in 1735.  The Sidney and Berne Davis Center actually sits atop a former Calusa settlement.

The other cylinder lists the species of plants collected by Thomas Edison in Fort Myers and around Florida for his experiments with trying to manufacture rubber from local sources.

If you haven't had the pleasure of attending an event at The Sidney and Berne Davis Art Center, try to get over there for an upcoming gala, exhibition, or concert.