Brush Fires are one of the dangers related to weather that you should know about when you live in Florida.

Towards the end of dry season, usually in April and May, we often have fires that occur in undeveloped and wooded areas.

Even in developed areas of the Cape, you can wake up in the morning and if you open the door, it smells like smoke outside.

You will probably not want to go for a swim or jog, so either exercise indoors or wait till later ............ the smoky smell clears up by the afternoon in most cases. 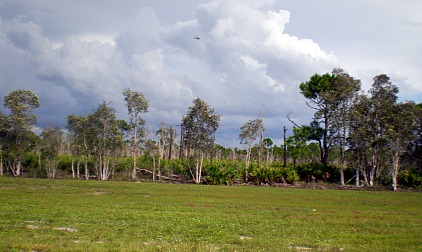 Many Florida wildfires are natural fires, sparked by lightning, and that can be a good thing because fire renews the soil, controls insects and diseases, clears out dead material, and promotes diversity with flora and fauna.

However, it is obviously a danger as fire approaches populated neighborhoods.

Before March, you should clear excess vegetation around your yard, particularly near your house. Clean gutters of leaves and pine needles.

Keep an eye on any saw palmettos, which are a danger when planted near homes, they are adapted to fire and sweat oil when they burn.

I've noticed that many of Cape Coral's fires are along Burnt Store Rd on the outskirts of town where we have fewer homes and some horse farms.

I was curious about the name of the road and wondered if it was because of brush fires ...... which it turns out, is not, but the story of how Burnt Store got it's name is still rather interesting.

It is said that Spanish explorer Hernando de Soto landed somewhere in the area of Burnt Store Rd in 1539, and artifacts have been found to support that idea.

But, Calusa Indians drove the Spaniards out by 1698. Then the Calusas left by 1705 because Seminole Indians started migrating to the area.

In the 1850's, there was a small group of Seminoles a few miles north of the Caloosahatchee River, whose chief was Billy Bowlegs.

One of the settlers was a recluse named Old Salty who was friends with the Seminole chief.

So, when a group of surveyors arrived and one of them went into the Seminole's territory without permission, Old Salty warned everyone that Billy Bowlegs would become insulted.

The settlers had built a general store called The Trading Post and it was a place for them to not only trade, but also to gather, chat, and gossip.

Billy Bowlegs snuck over to The Trading Post with a band of Indians one dark night and set it on fire.

Many settlers died in the fire and a few Indians were shot and killed as they ran away.

Bowlegs hid with Old Salty for a few days before leaving the area for Indian Territory on Oklahoma.

The Trading Post was never rebuilt, but from that day on, the road leading to it was and still is known as Burnt Store Rd.

Today, in its place, we have Burnt Store Marina, a popular boating resort with homes, restaurant, and marina.

Meanwhile, Old Salty lived a long life and became a respected member of the village as folks realized that his wisdom about the Indians could've saved lives.