Water Twisters - Also called water spouts, are a type of natural phenomenon that is basically tornadoes over oceans and large lakes.

These kinds of twisters are usually smaller and less forceful than land tornadoes, but they are still pretty dangerous, and have been known to affect Cape Coral weather.

If you see one, it will usually be followed by several more.

Anyone swimming or boating should get out of their path ASAP.

We've had some small tornadoes that have caused damage in Cape Coral during summer storms, and I wonder if they started as water spouts. 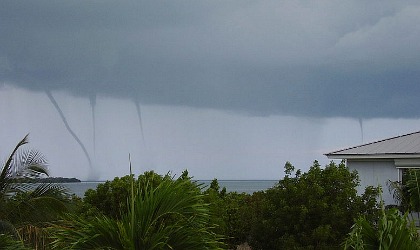 But, like tornado, a water spout has air that rises up in a spinning motion to a cloud.

They are common along Florida's coasts in summer and particularly off the Keys, they are also found on the rest of the Gulf Coast, in the Great Lakes, and along the West Coast.

Water spouts generally form from flat-bottomed clouds as light rain is beginning to fall from waters that are seemingly calm.

A funnel starts to grow into a swirling cloud of kicked-up seaspray that cools and condenses.

With winds up to 40mph, it lasts for about 10-15 minutes until stronger rain brings cooler air down and makes the funnel break apart.

By contrast, land tornadoes last about an hour with winds up to 150mph.

Many times from the air, you can see a disk of light surrounded by a dark circle on the water as the twister is about to form.

Boaters, however, can't see that and so scientists keep researching waterspouts to improve forecasting.

They will issue Hazardous Weather Outlook Alerts if they suspect spout formation within a few hours.

Scientists have also discovered more similarities between small land tornadoes and waterspouts than to large land tornadoes, and are sometimes called landspouts.

You have probably heard of the expression, "it's raining cats and dogs", well ......... birds, bats, frogs, and fish have been known to rain down in rare occurences in Honduras, for example.

It is believed that the animals are sucked up in a water twister and some survive, but most die in the fall or from being frozen to death while up in the clouds and actually found encased in ice. 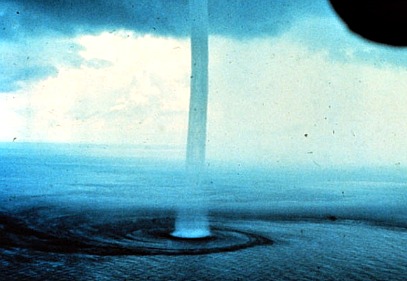