Hurricane Shutters - Accordion, panels, roll downs, or screens - with all these choices, which is the best hurricane protection?

Occupants of older homes usually put up plywood to protect their windows, and though plywood works well, it's unsightly and requires a large storage area when not in use.

In 2006, new construction came with the requirement to have either hurricane glass, which is very expensive, or aluminum hurricane shutters, along with the screws that hold them up.

You'll find the screws are installed around the windows and doors of the home and are ready to go.  The panels used to be made out of steel, but they were too heavy.

Nowadays, most people have the aluminum panels and they do work very well, but can be difficult to put up. 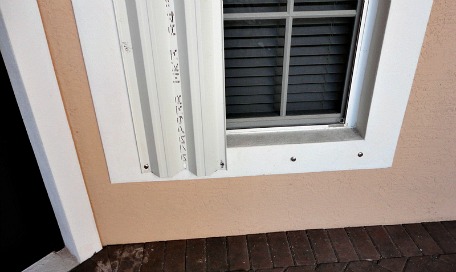 Make sure you wear gloves and close-toed shoes since the panels are sharp on the ends.

The newer aluminum panels are lighter and will bend if hit by debris, but because they are in a crenellated shape that bumps out from the window, usually 3", that allows room for the panels to be crushed and yet still protect the windows they cover.

They are also installed doubled-up and overlapping, to help reinforce them. 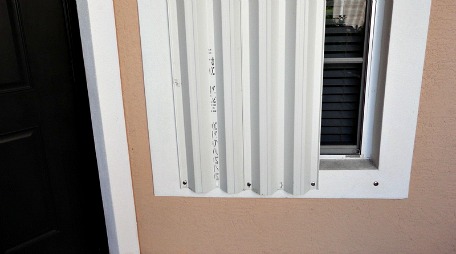 I've been told that aluminum panels are on their way out with new construction because of all the difficulties putting them up.

In 2010, the laws changed to require stronger and thicker panels in consideration of air pressure that rises within a building from broken windows that will lead to roof failure.

Researchers have found that the pressure is greater, the closer to the water and the higher up in a building.

I found out that my panels, which came with my condo in 2006 don't meet the new code ........ and neither do the accordion panels that my neighbors had installed before 2010.

Another problem with the panels are the screws. They are made of aluminum and galvanized steel ......... it's super important that they don't rust.

But, those metals are relatively soft and they strip out easily, and make installation extremely difficult and time-consuming, especially if they've been painted over, which is often the case.

Newer screws have a flatter head, they're called 1/4 20 Sidewalk Bolts with Phillips head for hurricane shutters ......... and you'll need to get the special #3 drill bit with extension to use with them to prevent stripping.

In the picture below, you can see, from right to left, the old style of screw - notice that it's stripped - the #3 bit, and the the new style of screw. 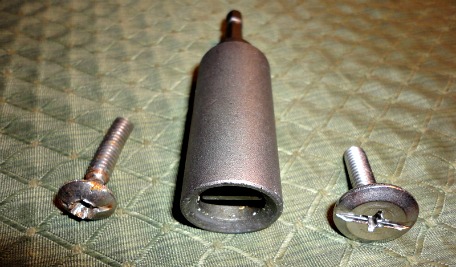 I ended up changing out all my old stripped out screws for the new ones and they work much better.

Be aware that the heads of the new screws are larger and the old panels have holes in them for the older and smaller screws. You may be able to slip the panels onto the new screws but for the most part, you'll have to remove the screws completely before putting the panels up.

If you are purchasing a home in Cape Coral with panels, I would suggest you take a look at your hurricane shutters and screws shortly after you move in .......... whatever you do, don't wait until the day before a hurricane threatens, you may need time to figure out how to put the panels up and you may need to change the screws out, or at least oil them up so they turn easily.

My panels came with a kit and instructions on how and where to put them up. The panels are also numbered and go with specific windows ........ pay attention and make sure you put the right shutters with the right windows.

You definitely don't want to be out in driving rain and wind dealing with messed up panels and screws!

Another problem is when your home is painted, the screws get painted too, and need to be replaced.  Paint gunks the screws up and makes it difficult to get them off and back on.

I recently had several estimates given for accordion shutters, the framework is permanently mounted on the outside. I have neighbors who have them and for the most part, all you have to do is close them shut and lock them ........ done! 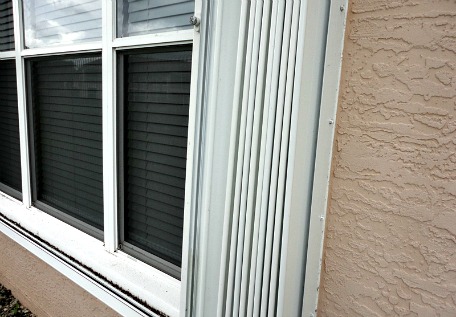 Although one person should be able to close up accordion shutters very quickly and easily, but that doesn't always happen.   Mud dauber nests are usually the culprit, preventing the shutters from closing or breaking them ........ with a call necessary to the shutter company or a painting company to get them fixed.

Some people don't like the way the framework looks on the outside, but I think it looks okay.

Either way, with regular or accordion shutters, they can be a pain in the neck.

One solution that I don't recommend is what is called hurricane screens. They are made out of a mesh fabric, the same fabric that is put on trampolines.

If you think logically, does it make sense to protect your windows from flying debris with mesh fabric?

No! If a pencil can go through the mesh, just think what a flying branch or sharp piece of metal can do. This fabric works well for window shades, but not for high winds.

The photo below shows my window shade which is made from fabric similar to the fabric used for hurricane screens.

Hurricane screen fabric is more coarsely woven and looks stronger, but the holes in the fabric are larger and therefore, I think, more easily pierced by flying objects. 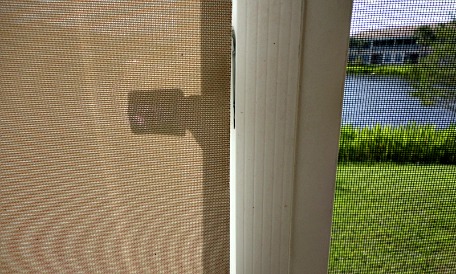 Also, mesh is installed one inch away from your window's glass, it's not enough space for protection should debris come slamming into the screen.

On your lanai, the screen is installed above and rolls down in tracks along the walls on either side. Heavy winds shake the screen back and forth, the tracks just aren't strong enough and the screens get damaged very easily.

Hurricane screens are much more expensive than accordion shutters, but only last 3-4 years. Aluminum panels and shutters can last a lifetime.

The fabric of hurricane screens breaks down in the hot Florida sun, even with UV protectant. If you have to have screens, then put them up on northern windows, preferably under cover.

I'm telling you though, many companies that sell hurricane shutters won't touch the stuff, they will not sell it or install it, because the screens just don't work well at all and are not worth the price.

In Cape Coral, we are under the Florida Building Code, which allows screens to be put up in our county.

The Miami-Dade Building Code is stricter and does not allow screens to be put up for hurricane protection, now you know the reason why.

So, what can you do if you want to see through your hurricane shutters? You can get several panels in one or two of your accordion shutters with Lexan, a see-through bullet-proof plastic.

You can have the whole shutter made of Lexan, but that would be very expensive.

Be aware that the accordion shutter on your lanai will have a track that takes up space, but the track can be removed if you want more space. You will have to screw it in before a storm hits, though. 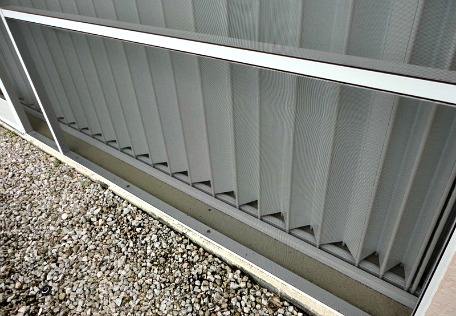 The shutters will also take up space on the wall, they stack up about 1" for each foot of the shutters.

Another good thing about accordion and roll-down shutters too, is they can be used for security as well as hurricane protection. They come with locks, this may be a feature that snowbirds want while they're away.

I don't know much about roll-down hurricane shutters but I have neighbors who have them on their small second story decorative windows that don't open. They've had some problems with the tracks that the shades roll up and down on.

They are also used on large openings on lanais, unusual windows, and commercial buildings.

You can roll them down manually with a tool from outside or with an automated mechanism that operates from the inside, which can be especially useful large and hard-to-reach openings.

Roll-down hurricane shutters do protect well against damaging winds, and can be used for security purposes or to block out sun and heat.

Well, as soon as I can afford it, I plan to get the accordion shutters with 3-4 panels made out of Lexan for the shutter I would have on my lanai.

I suggest you get at least 3 estimates once you're ready to buy shutters, and the companies I recommend are:

If you haven't read it yet, go to my About Hurricanes page, to find about hurricane tips, information, preparation, local shelters, and more.

Be aware that when you have all your shutters up with no light coming in you'll get what I call the "cave effect", which made us very sleepy all day.

You also won't be able to see what's was going on outside, we had to keep opening up the front door to see what the storm was doing. We have a lake behind us and I had no clue if the water was rising to a dangerous level or not.

Many thanks to Cliff Yates of  Jupiter Industries, a distributor of aluminum extrusions used for hurricane shutters and other purposes, for providing me with all this great information and advice based on his many years of experience with all of these hurricane protection products. 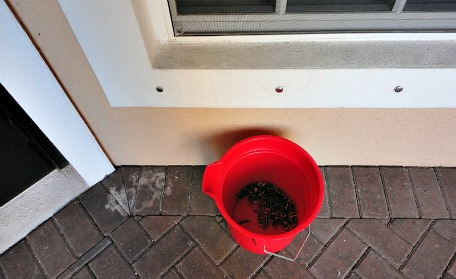 The final option to consider is impact-resistant shatterproof glass windows.

Although the cost of these windows is higher initially than for regular windows, as time passes, the cost of hiring someone to put up and take down shutters could add up to more.

Other advantages are curb appeal and appearance, convenience, and lower insurance premiums.

Return to About Hurricanes